“Aquarium” referred as the tank of water which is home to many small and large fishes, invertebrates, and amphibians, aquatic reptiles such as the tortoise, turtle, etc and the aquatic plants.

The aquarium is derived from two Latin words “AQUA” means “water” and the suffix “ARIUM” means “the place for relating to.” It can also consider as the aquatic maintenance organisms, or it can be a good facility to collect aquatic organisms for study or under consideration.

The interest had gone so far from only being the hobby today; the aquariums are now also the source of earning money. Nowadays large aquariums have been made that can have THE WHALE in it also. Now you can imagine the sizes of aquariums the World have, most of the largest aquariums are:

Largest Aquariums in the World

Georgia Aquarium is the world’s largest aquarium having more than 10 thousand species in seven different vast galleries. Out of Asia, this aquarium is only the one which has the most gigantic animals including whale sharks.

The animals reside in 10 million US gallons of marine water. Hundreds of species live there which are treated like pet.

The aquarium is situated in Atlanta, Georgia, United States and was surpassed by Marine Life Park in Singapore. It was presented on 23rd November 2005. The aquarium encompasses of 550,000 square feet of covered space. 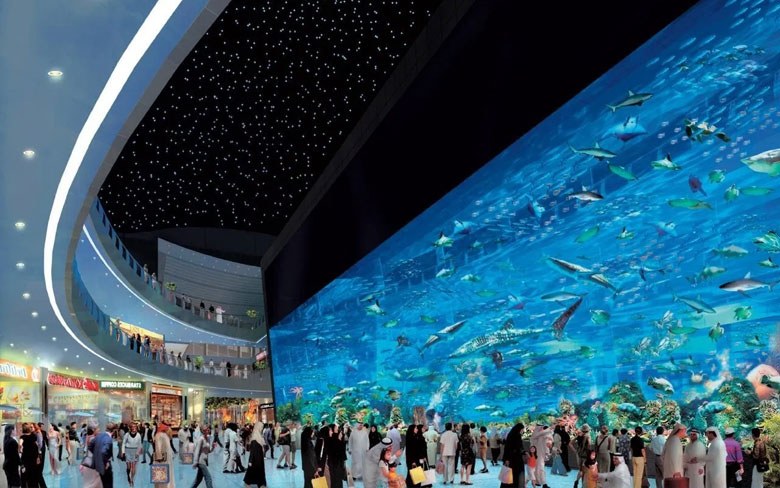 Dubai Mall is the world’s largest mall, and it has the large aquarium it’s center of the mall it comprises of the 140 species including 300 rays and sharks in the aquarium and has the world’s biggest collection of sand tiger sharks.

It has about 33000 animals in the aquarium. The aquarium is 51 meters long, 11 meters high and 20-meter wide tunnel in which visitors use small boats to see the species beneath their shoes. The species is of three ecological zones, the Living Zone, The Rocky Shore, and the Rainforest.

It was designed by PADDLE THORP and, managed by amaar entertainment. 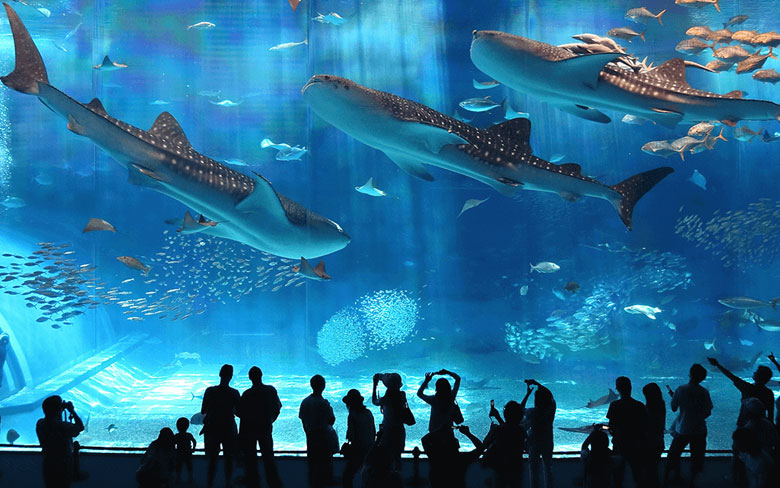 Okinawa churaumi is the public aquarium in the Ocean Expo Park, Okinawa, Japan.

It was inaugurated on November 1, 2002. The aquarium has the theme of “encounter the Okinawan Sea.”

Species included are mammals, fishes, birds, and reptiles, etc, among those species are the penguins, dolphins, sea lions, walruses, beluga whales and more.

It was opened on 14th February 2003 and designed by the architect “Flix Candela.” The park is divided into ten deferent areas. 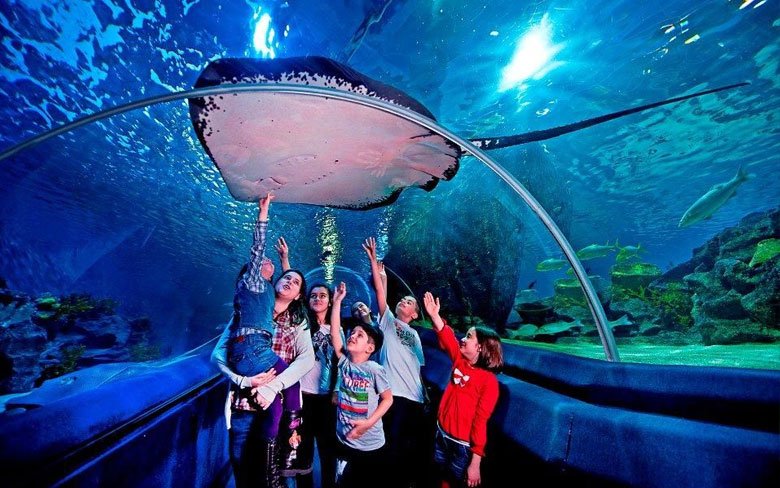 TurkuaZoo is also referred as sea life. It is the largest aquarium in the south area of Asia in Istanbul, Turkey. It comprises of 550000 cubic meter sq.ft. About 10,000 animals are living in the volume of 7000 cubic meters of water. Mainly the creatures are tiger sharks, piranha, giant stingrays etc

It was established in 2009, inside the FORUM ISTANBUL SHOPPING MALL. A long underwater tunnel of about 80 meters is the way to study and enjoy aquatic organism there. 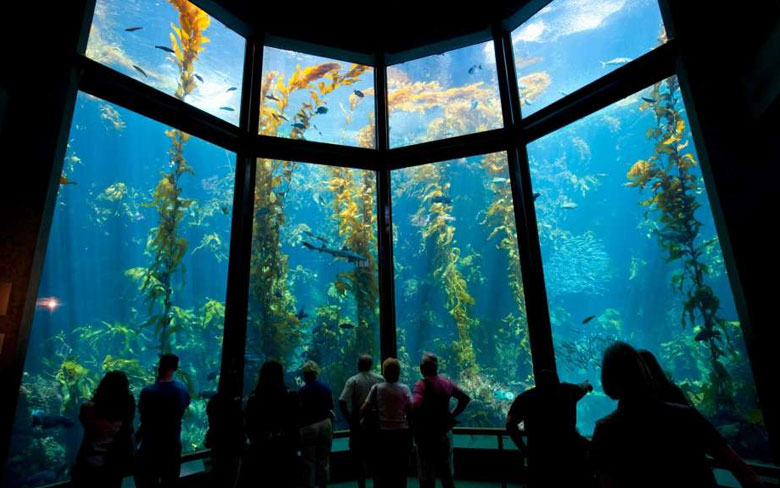 One of the great nonprofit public aquariums is the Monterey Bay aquarium situated in California. It is the first aquarium that keen to help the life cycle of jellyfishes and have great eyes on White sharks.

It was made with the slogan of “TO INSPIRE THE CONSERVATION OF THE OCEAN.” It was inaugurated on October 20, 1984 in Cannery Row, Monterey, California. It covers the space of about 322000 sq.ft with its 35000 animals of about 550 species. 2.3 US Gallons of water is there in the tanks 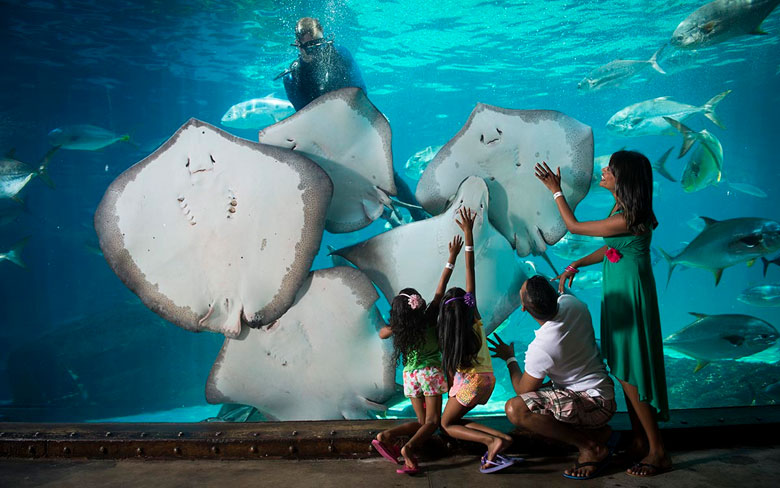 The seventh-largest aquarium in the world with 32 tanks holding 17500 cubic meters of water. It is an underground aquarium, and the best restaurants place to din in with the atmosphere of underwater friends.

16 hectare of the land is consumed by the aquarium in with 10,000 animal resides. It was developed on 30th April 2004 in Durban, SOUTH AFRICA. It was also awarded for “Outstanding Achievement in Thematic Creative Design.” 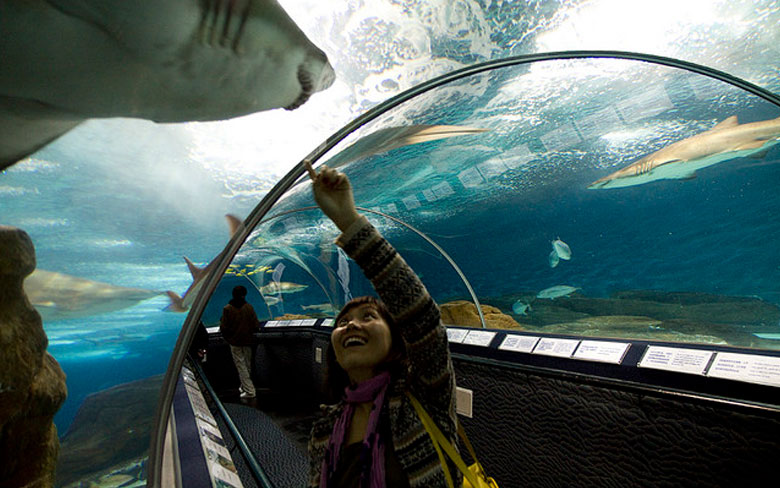 The longest measuring tunnel aquarium of the worlds, 155 meters long, divided into 9 zones of ecological living including China zone, South American zone, and African zone. It is a public aquarium with wide variety of animals.

Aquarium of Genoa (About 1 Million Gallons) 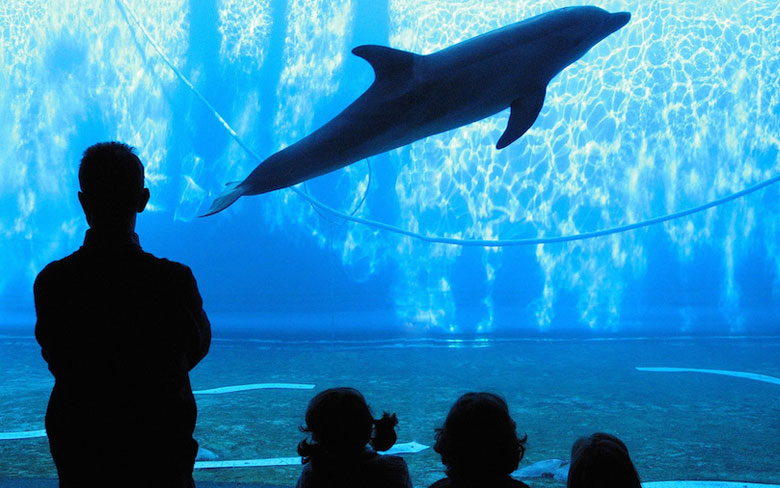 The largest aquarium in ITALY. It was originally built for the “GENOA EXPO 92”. It welcomes about 1.2 million people every year. It covers the land of about 33000 sq.ft, having more than 500 species.

The volume of water in tanks is 6000000 liters. Three are 6000 animals living in 70 different tanks. The most attractive animal here is dolphins, seals, and sharks.

It was opened on 13th April, 1988as the UNDERWATER WORLD. Later on its name was changed to Aquariums of Western Australia (AQWA).It’s a privately owned aquarium consisted of a long tunnel of about 98 meters long.

Moreover, if some know diving then they could also div with the aquarium divemaster. There are 400 species including 4000 fishes. The AQWA holds about 4000000 liters of water in its tanks.

So if you are one of the fonds of underwater organisms then you should visit these beautiful aquariums. They will surely give you the best experience of underwater in their tunnels. You will get a great chance to look and study more specifically after seeing them with your own eyes. People visit this area frequently and always have good remarks about these places.

7 Ways to Prevent Fire in the Workplace